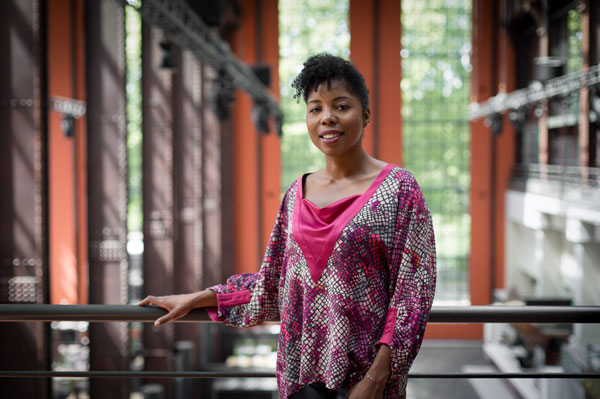 An engaged woman
After graduating from the Sorbonne with a Master’s in marketing and distribution in audiovisual arts, Laurence Lascary founded her audiovisual production company “De l’autre côté du Périph” (DAPC) in 2008. Her ambition was to promote a new generation of authors, proposing cosmopolitan works of art, reflecting France’s diversity today.
”The Ascension”, by Ludovic Bernard, her first feature-length movie came out early 2017 and was a success: the film clocked up over a million box-office entries and made her company known. Laurence Lascary has since ramped up new productions, of which several are being developed, like “Leave,” a documentary telling the story of economic migrants who try to make it to their European Eldorado. The aim of the director, Mary-Noel Niba, is to send out a positive message regarding the African continent.

Dare to ask
At a lunch organised by BNP Paribas and the Citizen Entrepreneurs association, Laurence Lascary met Martine Liautaud, who became her mentor within the WIF Foundation.

Officially a mentee since last October, Laurence Lascary benefits from regular mentoring sessions; the discussions have helped her better understand her growth, and above all have taught her to dare to ask – initially difficult for the young producer who developed her business alone.
“Discussions with Martine Liautaud helped me to rethink my vision of leadership; I’m learning to ask for advice. Talking to the other mentees in the network, I realise that I’m not the only one who finds it hard to ask for help – but that’s how we learn.”

Her opinion on the European study of entrepreneurs
“This type of research is important: it helps us go beyond our perceptions with hard facts, it takes the debate a step further by better identifying the areas to improve. As for the results, I recognise myself in the tenacity that women entrepreneurs cite; my career has been full of adventures!”