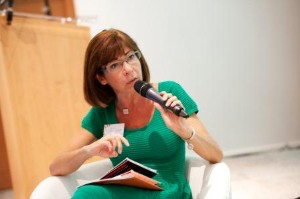 Tell us about your career
Passionate about the European project, I began my career in Brussels, where after several jobs, I found my vocation: teaching and research. After my doctorate in law to begin a career as a professor, ESSEC offered me the post of professor-researcher in lobbying and European corporate law. I went on to found the Centre for European Law and Economics at ESSEC. Following the 2008 Women’s Forum, I became interested in gender parity and women entrepreneurship. I set up the Women-ESSEC Executive programs and the Women’s Start-upers’ Club.

What motivated you to co-lead the study with Women Initiative Foundation?
Objectively, it seems to me to be crucial to identify what goes on in the heads of entrepreneurs, both qualitatively and quantitively. We cannot develop public policies or effective action plans without having a set of data to act on.
More subjectively, it was an honour for me to be invited to give my opinions and bring my expertise to the study, after years of working on the challenges women entrepreneurs face. Martine Liautaud is a woman I respect enormously, and the success of her mentoring programme is impressive. Finally, working closely with Annie Combelles on this ambitious project was exciting.

You analysed the results closely. What did you learn personally?
There were both confirmations and surprises. Regarding the stereotypes, the data collected confirmed what I’ve observed by mentoring women entrepreneurs on ESSEC programs, notably the Women’s Start-upers’ Club I set up. The results also confirm the importance of the entrepreneurs’ social, cultural and economic context. In Italy for example, there’s a real openness to international development and solid family support. In France, we have a lot of progress to make concerning our relationship with money and funding for women entrepreneurs, as well as openness to international development right from the start of projects.